#MilitantFactionsQuotes 100: Metaphors, like oil, coal and the humour of John Bishop, were a diminishingly limited resource 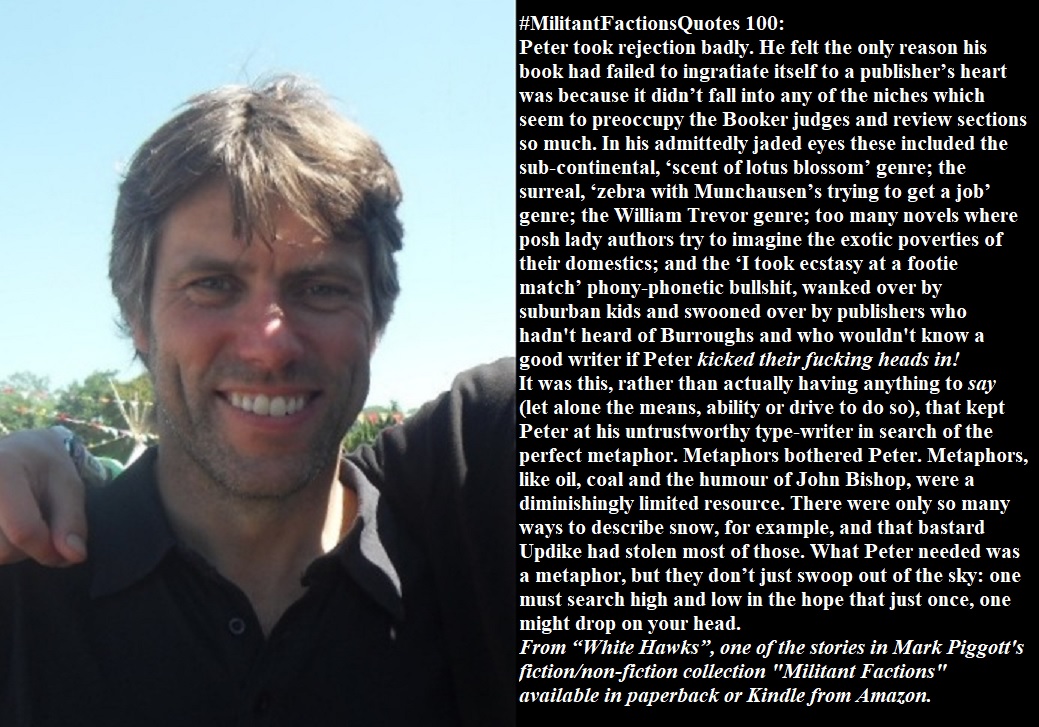 Peter took rejection badly. He felt the only reason his book had failed to ingratiate itself to a publisher’s heart was because it didn’t fall into any of the niches which seem to preoccupy the Booker judges and review sections so much. In his admittedly jaded eyes these included the sub-continental, ‘scent of lotus blossom’ genre; the surreal, ‘zebra with Munchausen’s trying to get a job’ genre; the William Trevor genre; too many novels where posh lady authors try to imagine the exotic poverties of their domestics; and the ‘I took ecstasy at a footie match’ phony-phonetic bullshit, wanked over by suburban kids and swooned over by publishers who hadn't heard of Burroughs and who wouldn't know a good writer if Peter kicked their fucking heads in!

It was this, rather than actually having anything to say (let alone the means, ability or drive to do so), that kept Peter at his untrustworthy type-writer in search of the perfect metaphor. Metaphors bothered Peter. Metaphors, like oil, coal and the humour of John Bishop, were a diminishingly limited resource. There were only so many ways to describe snow, for example, and that bastard Updike had stolen most of those. What Peter needed was a metaphor, but they don’t just swoop out of the sky: one must search high and low in the hope that just once, one might drop on your head.

From “White Hawks”, one of the stories in Mark Piggott's fiction/non-fiction collection "Militant Factions" available in paperback or Kindle from Amazon.

*From 20-24 December 2021, all four of my published books will be available FREE on Amazon Kindle.